On July 3, 1894, a special election was called by the common council to vote on the sale of $25,000 in bonds for the purpose of establishing a water works and electric light utility. The resolution passed by a 190 to 117 vote.

Marshall's first power plant was constructed at a cost of $24,340. By early December of 1894, the waterworks was in operation and on December 21, the first lights were turned on using electricity generated from a Ball steam engine with a belted dynamo. Thus was borne a municipal electric and water utility which eventually became Marshall Municipal Utilities.

Marshall began selling electricity to the nearby communities of Russell and Lynd in 1915. This service lasted until 1959.

In 1915, a new 90,000 gallon water tower was constructed which replaced the old wooden tower that had fallen over. This tower was used until 2002 and was taken down in 2003. Improvements to the water mains, hydrants, gates, heating system, and building followed in 1919.

In 1924, the mortgage for the original cost of the waterworks and power plant construction was paid off and burned at a celebration in the power plant.

On June 6, 1927, the first of many attempts by Northern States Power (NSP) to purchase the utilities was rejected by Marshall's City Council.

To meet Marshall's growing need for electricity during the early 1930's, the city council approved the purchase of its first diesel generator, a Fairbanks-Morse unit rated at 600 KW.

On February 5, 1934, the Water, Light, and Building Commission was formed as the governing body of the utilities. 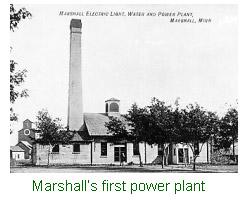 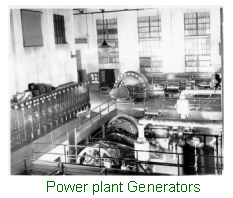 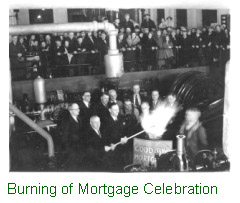 By 1935, almost all of the original power plant had been replaced. On September 10, 1937, a new addition to the power plant was approved to allow for the installation of more generation.

On June 21, 1938, a second diesel generator rated at 800 KW was installed and by August 1, 1941, a third diesel generator, a 1200 KW Fairbanks Morse unit was added to meet Marshall's growing electrical needs.

1947 was a busy year for Marshall Utilities. A new office building was constructed as well as the installation of a new downtown underground heating system. A 4th diesel generator rated at 1,136 KW was also installed.

In 1957 the citizens of Marshall voted to approve the construction of a power line to run 7 miles east of town and also the construction of a substation and switch gear. This construction would enable transmission of electricity from the new Pick-Sloan Missouri Basin hydroelectric project to Marshall. That allocation of power is now referred to as Marshall's WAPA (Western Area Power Administration) allocation. By July of 1958, the 69kv transmission line was completed and the first purchased power arrived from the Missouri River to Marshall.

On August 17, 1959, bids were awarded for the construction of a new 1600 gallon per minute water filtration plant to be located southeast of Marshall. A two million gallon storage reservoir was added in 1968.

To meet Marshall's growing water supply needs, a second water tower was constructed in 1963 near the hospital with a capacity of 500,000 gallons.

On March 8, 1968, General Electric was awarded the bid for the purchase of a new combustion gas turbine rated at 18 megawatts. This unit is still in use today for reserve capacity and emergency backup.

Construction began in 1975 on a new substation located at Erie Road near the Industrial Park, along with a 115 KV NSP interconnection and transmission line. 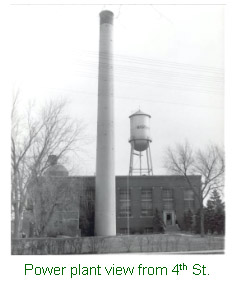 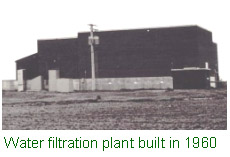 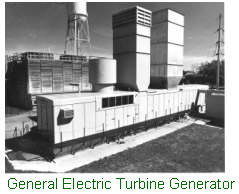 The mid-seventies brought about several changes to Marshall Utilities. On November 9, 1976, the utilities commission signed a contract to purchase power from Heartland Consumers Power District (HCPD) to meet its growing need for electricity. 1976 also marked the end of providing steam heating service to the downtown area. A new 8,000 sq. ft. vehicle storage facility was constructed in 1977.

Steady commercial growth during the 1980.s, along with a new corn processing plant, created the need for an expansion at the Erie Road substation and the construction of a new 1 million gallon water tower near the street department garage which was completed in 1988.

Several improvements were made to Marshall Utilities during the 1990.s beginning with the demolition of the power plant which was no longer being used. A new warehouse was constructed on the power plant site in 1993. MMU's office building was demolished in 1993 and a new office building was completed in October of 1994. Two new substations were also added in 1994 along with a new 115 kV transmission and fiber loop connecting all MMU substations. Construction began on a new water treatment facility in September of 1997, which was completed in July of 1999.

As the city of Marshall continues to grow, Marshall Municipal Utilities is prepared to meets those growing needs. We have a long term power purchase contract with Missouri River Energy Services in place and have secured future water supply resources. 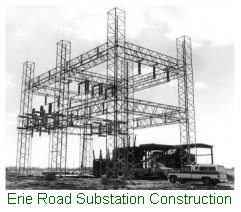 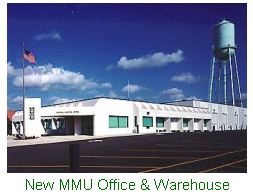 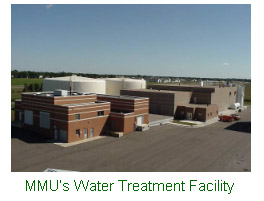